Xanthi, Greece – Alternative Tourism (the term has now been replaced: we are talking now about “special” tourism) is a broad term, necessarily so. It encompasses any type of activity where the visitor can experience part of the local culture. Traditional tourism—for Greece, sand and sun—has disadvantages: it only happens in the summer, and it doesn’t always attract the right people, with the devastating effect of creating social problems for the local communities that accept visitors. In Zakynthos, for example, British tourists come to get drunk nonstop, to do what they can’t do at home, and the local social network is almost broken. Now that tourism is the main industry in Greece, we’ve realized that there are many advantages to attracting tourists who respect the ecosystem, the residents, and the culture, while expanding the tourist season. Thus, Greece now markets itself as a 365-day destination.

The “New Agriculture for a New Generation” (NANG) program’s Alternative Tourism Program aims to make a name for itself in the industry. The highly competitive, year-long program accepts 100 students in total: 50 in Thessaloniki, 25 in Volos, and 25 in Ioannina. Trainees apply electronically, and their applications are reviewed by a three-member committee. They are selected based on strict criteria. Last year, the program received 350 applications for Thessaloniki alone. Applicants must be between 18 and 40 years old. Most are university graduates; many do not have master’s degrees and are looking for a second career path.

Last year’s trainees worked to redefine the tourist profile of the mountain village of Elatochori Pierias, which neighbors Katerini and Mount Olympus. Trainees and professors worked with the residents of Elatochori to expand and diversity the village’s tourism business, which in recent years had been overly dependent on its ski center. The trainees proposed an innovative tourism product that combined unique gastronomic experiences, outdoor activities, and creative workshops for adults and children. The proposed tourism product uses the flowers of the plant Sideritis Scardica as a brand since Greek mountain tea flourishes in the area. “A place can really flourish when the people who live and breathe there have a vision and a desire to work and make the best possible use of their region's resources. This love for their home and care for its development is one of the first things one can perceive about Elatochori and its inhabitants,” said Antonia Galani, a biologist who worked on the project.

This year, 2018-2019 trainees decided to “adopt” the city of Xanthi and tried to utilize all of its resources—natural, cultural, and human—with the main goal of creating a holistic tourism product which combines the multiculturalism, the gastronomy, and also the natural wealth of the area.

“First of all, you have to convince the residents that you care about them and share their concerns. You can’t go in as an intruder or as an expert. This year, Xanthi was a greater challenge than Elatochori because it is a larger area, and Xanthi's officials and agencies already have already included in their cultural agenda many activities and many plans with the aim of increasing tourism,” said Communications Coordinator Maria Soumelidou, who teaches in the program “Legal Framework and Ethics in Tourism.”

The final proposal came when the trainees and their trainers collaborated with specialized partners in the area, based, on the one hand, on the region’s rare breed of shorthorn cattle and on the other hand, on Xanthi’s Belle Epoque era. The trainees formed five working groups, each focused on a different activity like gastronomy, urban/cultural tourism, outdoor activities in the urban environment, marketing, and costing. Each group of 10-15 trainees collaborated with one or two trainers and one mentor from the research team that consisted of graduates from the same program. The trainees chose their groups according to their interests and experiences after carefully reading the feasibility study prepared by the research team.

We believe that the NANG program will bear more fruit if we build synergies between different sectors. The best way to highlight this collaboration is a two-day event that includes an international business conference, a culinary symposium, an interactive demonstration of new trends in wellness tourism and conference tourism, and finally, a dramatized tour of the history of the Old Town of Xanthi. At the same time, catering companies in Xanthi will cook for the first time the tasty meat of the shorthorn cattle and have recipes available to the public. These animals are monitored by animal scientists and veterinarians from the American Farm School while the butchering and maturing is done by a team of professionals and experts in Xanthi. In fact, this action will “travel” to other parts of Greece to highlight indigenous Greek cattle breeds.

The program also enables its graduates to work for two months in an alternative tourism-related businesses and/or organizations in Greece. “More than 60 businesses have requested to host one or two graduates,” Maria said. “These are businesses, municipalities, or organizations all over Greece who are either implementing or want to implement an alternative tourism strategy but don’t have the know-how. Today, 64 graduates work in these businesses, while many have been hired permanently. Like the Xanthi project, this experience places our trainees out in the real world, where there are many miles and obstacles between the birth of an idea and its realization.”

“After three years, we will have 300 enthusiastic graduates of this program. People from all different backgrounds who have the same dream,” Maria said. “I hope to see lots of collaborations, synergies, great ideas. I want our graduates to start their own companies and change people’s attitudes about what tourism means in Greece.” 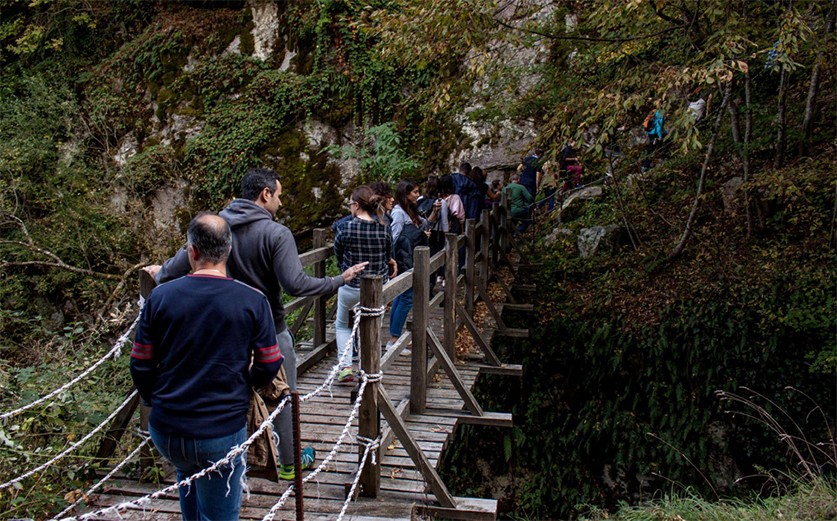