Vasilis Kostopoulos, 22, grows Greek mountain tea, or tsai tou vounou, in the Pierian mountains, near Mount Olympus. Since he was a boy, he loved nature, loved the forest and the rich smell of the mountains. In 2007, when he was 10 years old, his father Konstantinos, a producer of beans and tobacco, was the first to get involved with the production of tea. Until then, no one in Elatochori grew it in such large quantities. “My father saw others growing and selling tea and decided to give it a try,” Vasilis said. “He owns 35 stremma (3.5 hectares) of land, and when I told him I wanted to grow tea myself, he gave me my first stremma--and not only the stremma, but his knowledge and advice as well. ‘Keep going,’ he always tells me. ‘Don’t give up when there are difficulties.’”

From his father, Vasilis inherited a stubborn dedication to his work. “We’re very close, he and I, and we have a good working relationship. He was very happy with my decision to follow in his footsteps, and now my parents and I work side by side in the fields.”

Indeed, as I interviewed Vasilis over coffee at the Atrion Hotel, I noticed he had a maturity that seemed rare for his age. He likes house music, and after our interview, he changed into a white button-down shirt to DJ at a bar. During the winter, he works at the Ski Center in Elatochori and rides his mountain bike through the many trails around the village. “I don’t have as much time as other guys my age to hang out with friends, to go on walks or swim at the beach,” he said. “But to me, it’s worth it.”

Greek mountain tea is a single varietal herbal tea made from the dried flowers, leaves, and stems of a Greek herb known as sideritis or ironwort. Popular in the Mediterranean and the Balkans, sideritis was known to the ancient Greeks, who supposedly named it for its ability to heal wounds caused by iron weapons in battle. The herb grows only in the mountain regions of Greece, at elevations of 900 meters (3000 feet), and is prevalent on the slopes of Mount Olympus. The plant has a woolly stalk, spear-shaped leaves, and small, fragrant yellow flowers.

Vasilis has been producing Greek mountain tea since 2015. He owns ten stremma and plans to add another five. Each stremma yields 110-150 kilos of tea. During the harvest season in May and June, the tea grows densely in the fields, and 20 people collect it by hand during the day when it is dry. “I love collecting the tea and smelling it all around me. It’s a beautiful working environment,” Vasilis said. A good worker can collect 12-15 kilos of tea per day, and it takes approximately four days to harvest one stremma.

“We had a difficult season this past year,” Vasilis said. “It rained a lot, and the tea can only be collected when it is dry.” Depending on environmental factors, it takes 10 to 15 days for the tea to dry in the warehouse on giant pallets.

Vasilis sells his tea for €7-8 euros per kilo. Tea with an organic designation, which must be grown naturally without fertilizer or additives, fetches a higher price, €11-12 euros per kilo. “It takes three years to have a fully organic stremma,” Vasilis said. “Most of my father’s stremmata are organic, and I’m two years into preparing another.”

Vasilis and nine other tea producers in the region will receive training and advice from New Agriculture for a New Generation over the next three years. “Our mentors ask us what production problems we have and help us find solutions,” Vasilis said. “They also provide advice about how to package and sell the tea. So far, the most important lesson I’ve learned is to open your mind, to think outside the box.” Through the program, Vasilis has also met other tea producers from nearby villages, and they’ve started to work together.

“When my father gave me my first stremma, I had to decide how to run it,” Vasilis said. “Like many young men, I dreamed of doing something larger than my father, of making the most out of what he had given me.” Vasilis currently sells his tea in Serres, Katerini, Thessaloniki, and Athens. He’s constantly experimenting, looking for new ways to package his tea and expand to new markets. “I want to be able to sell outside of Greece,” he told me. “Lots of people haven’t heard about tsai tou vounou, but Mount Olympus is a brand name that could help to highlight some of the tea’s special properties.”

Sideritis, as I learned, has a variety of health benefits. It has traditionally been used to aid digestion, strengthen the immune system, and ease stress. Recent scientific studies support its popular use to prevent colds, flu, and allergies: sideritis is considered a potent antioxidant whose essential oils have antimicrobial and antifungal properties. Certain compounds of the plant may even help to prevent cognitive disorders like Alzheimer’s and dementia. The tea is naturally caffeine free and has a golden-brown color when brewed. It pairs well with honey and a slice of lemon.

“I want to create tea blends with other aromatic herbs like lavender, mint, and chamomile,” Vasilis said. “I’m also experimenting with iced tea mixed with fruit combinations for a light and refreshing summer drink. Tsai tou vounou can even be used to add subtle flavor notes to foods like baked bread and meat dishes.”

On Saturday evening, Vasilis spoke with the participants from our Train the Trainers program in Elatochori and gave them each a beautiful bouquet of his tea tied in brown twine because, he said, “When the plant is cut up, it loses all its beauty.”

“I want to have something to give my children,” Vasilis told me. “I want to be able to live off my work, and I want to offer my children a way to live. The advice I’d give my children is the same advice that my father gave to me: We strive and we struggle, but you’ve got to keep at it. Keep trying.” 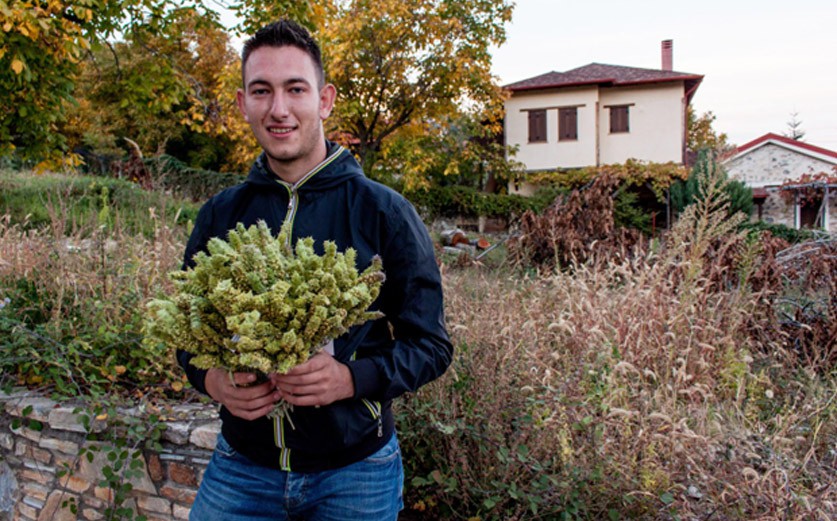