Vicky Krystallidou, 44 years old, was born and lives in Thessaloniki. She’s the project leader for the program “Sheep and Goat: Enhancing Dairy and Meat Sector” at the American Farm School (AFS), a part of the New Agriculture for a New Generation program. She’s married and has two sons, 10 and 8. Her family came from Istanbul in 1914, before the population exchange. Vicky is an animal scientist who received her PhD in Animal Nutrition and an MSc in Dairy Animal Science from the University of Reading after being awarded a scholarship from IKY (Greek State Scholarship Institute). She holds Diplomas in Animal Production from the Technological Educational Institution (TEI) of Thessaloniki and ASPETE (certified adult educator). “I was drawn into animal production by pure luck,” Vicky said. “I really wanted to be a doctor, but I failed those exams. Then I had a degree as a dentist assistant. But after the first semester in animal production, I loved it. I think that people who start working with animals come to really love them. I don’t think I would do anything different.”

After returning to Greece, Vicky worked as a part-time lecturer at the Technological Educational Institution (TEI) of Thessaloniki and Larisa and as an advisor at Hellenic Feed Industries (ELVIZ). Then she came to American Farm School, where she has worked as a lecturer at Perrotis College and as a project leader in the Strategic Project Management Office for the past four years. Her research interests include animal nutrition and its impact on animal products and human health, monitoring feed formulations to meet quality performance and animal health standards, and evaluating chemical and nutritional value of feeds. “She’s also a very good cook,” said Ilias Kalfas, project leader of the Small Farm Adoption program. “She may not have a pencil on her, but she definitely has a knife!”

As part of the Sheep and Goat program, Vicky visits farms in 12 regions throughout Northern Greece, from Ioannina to Orestiada and down to Karditsa. Each region has about 8 farmers whom she visits two to three times per month. She examines each farmer’s animals, and gives them advice to help them enhance their products, and works with them to set goals. “The social dynamics of every group are different,” she said. “In Orestiada, for example, I work with Pomaks, Greek Muslims who live in villages in the Rhodopi Mountains near Bulgaria.”

Vicky is also working with food scientists, butchers, cheese makers, and chefs to develop new products from sheep and goat milk. In collaboration with Creta Farms’ new Research and Development initiative New Milk and the Department of Food Science at Aristotle University, she produced a new drink made from fermented goat-milk yogurt which is available in multiple flavors. In the next two years, Vicky aims to produce spreadable and hard cheeses from goat milk. In addition, she is working with the Hellenic Agricultural Organization DIMITRA to research the feasibility of producing heavyweight lambs. Lambs in Greece are usually slaughtered at 12 kilos, while heavyweight lambs are slaughtered at 18-20 kilos. “Although Greece ranks third in sheep production in Europe, we import much of our meat from New Zealand and Australia,” Vicky said. “By encouraging farmers to shift to heavyweight lamb production, we can reduce our dependence on imports from other countries.”

Vicky is also collaborating with the Alternative Tourism program at AFS, which has adopted the city of Xanthi this year for its activities. Xanthi and the Rhodopi Mountains are home to the Greek shorthorn cattle, the only indigenous breed left in Greece. Only 600-700 of the cattle remain, grazing free ly in the mountains between Xanthi and Kommotini. “We hope to certify and protect the breed, giving farmers an opportunity to sell it at a higher price. We’re going to have a three-day international conference, 7-9 June, focusing on the Belle Epoque era of Xanthi and its long-forgotten breed of shorthorn cattle. We’ve partnered with Brigade, an association of chefs, who will come to Xanthi to make recipes from the meat--they say it really does taste better,” Vicky said. “And since the breed is from Pomakohoria, we’ll also have an opportunity to work with the Pomaks and highlight what they are doing.” 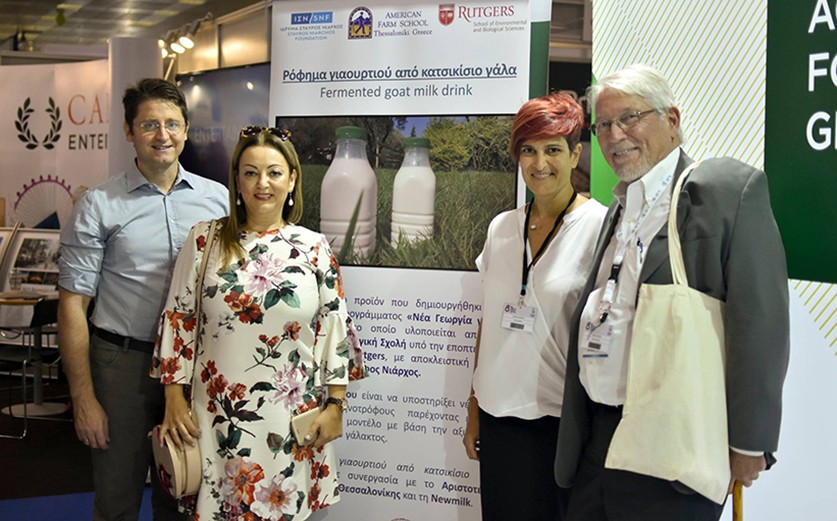