Agroanelixis: supporting young farmers to create their own cottage industries.

Agrifood accelerator "Agroanelixis-cottage industries" aims at supporting farmers and stockbreeders with innovative business ideas in the agri-food sector, so that they can create or develop their own cottage industry. Among the beneficiaries of the agri-food acceleration program implemented by the organization "New Agriculture New Generation", is George Alexandris, a young producer that wishes to create his own home-based business, based on the cultivation and processing of almonds.

George comes from Nessonas, a village which is very close to Larissa. He has studied in Volos, in the Department of "Agriculture of Crop Production and Rural Environment" of the University of Thessaly. Although he currently works for a company based in Larissa, he is also involved in the cultivation of almonds.

"We have had almond trees from my grandfather, since 1970. I remember as a child, I enjoyed picking almonds that fell from the trees and spending a lot of time on the estates. The almond trees then passed to my father and slowly, it was my turn to see how I can use them in the best possible way ", says George Alexandris.

Return to cottage industries, giving value to the product and supporting tradition

Along with his studies, George was thinking of ways to use the almonds they produce in collaboration with his father, as they are fruits of excellent quality, as he says characteristically. For many years, all the annual production of almonds was given for sale to a partner who traded the products. In the last year, however, George began to deal with the idea of creating a home-made business, which will produce, standardize, and sell both almonds and their interesting by-products.

So last August, during the almond harvest season, he tentatively kept a small quantity of almonds to see how he could handle it, taking the first step towards creating his own cottage industry. In the first phase, he started breaking the almonds and taking out the crumb, which he started selling to his close circle, to form a first picture of the demand and interest that may arise for his product. At the same time, with the help of friends but also by putting his own touch, he started designing the brand, creating a logo, but also packages designed with care and love. As he says, "I am interested in offering as much value as possible to the product. I started with the sale of almond kernel, now I have created almond butter while in the immediate plans is the production of almond drink or even almond cheese ".

From January 2021, George started selling the almond kernel that he produces and presents in a package, which is specially designed to close with a zip, so that the product always remains fresh. He started visiting various mini markets or delicatessens with the aim of working together to sell his product and thus, he has already managed to build in these 5 months a small network of shops, which are located not only in Larissa, but some of them areas such as Dimitsana but also Athens.

Special traits of George seem to be the importance in detail but also the experimentation aimed at creating the best possible products and services. As he says, he is constantly trying new things he can do with the precious fruit of the almond and experimenting with quantities and ingredients, to produce innovative products for the Greek market, such as milk, butter or almond cheese.

The Agrifood Accelerator "Agroanelixis" supports young people with ideas and dreams for the agri-food industry.

However, in this effort for development and innovation, George Alexandris is not alone. Through his participation in the Agifood Acceleration program "Agroanelixis-Cottage Industries” he now has experts in the agrifood sector, professionals, mentors, and the whole team of the “New Agriculture New Generation” organization, to help him in his next steps.

George came in touch with the organization "Nea Agriculture New Generation" about 1 year ago and after attending one of its seminars, he realized that it is worth following its actions. Thus, he managed to participate in the digital training program dedicated to the export of agri-food products, which was implemented in June 2020 by New Agriculture New Generation and as he states, he believes that he learned many things that helped him a lot during the critical phase of the start-up of his cottage industry. "It gave me a much needed boost to dare to start my project!", he states.

After this participation, then came his selection in the agrifood acceleration program "Agroanelixis-Cottage Industries", which began in April 2021. George says he is not just satisfied, but excited, from the knowledge he has received so far from the program. "Mentors are great, everyone, one by one. They make us feel very familiar and help us with anything we may need. What they convey to us is not just a theory, it is a 100% practice. They are people with great experience and everything they say, they have experienced it ".

He also states that, “I am impressed by the speeches of young people, who a few years ago were like us and now have managed to do their own business. Through their words I took courage, I saw that I too could follow in their footsteps and develop in the industry. You see that if you keep trying, you will succeed!”. The program may be completed in June 2021, but the beneficiaries will be accompanied by specialized mentors and industry professionals for the next at least 3 months, who will continue to support them in the implementation of their business planning.

Business plan for the expansion and support of cottage industries, implemented by the organization "New Agriculture New Generation"

The team of "New Agriculture New Generation", visited George in Larissa and together, they designed a business plan to expand and support his craft. Through the program, he will be able to build a production and packaging area in the village, where the almond trees are located, in Nessona, Larissa. Thus, the goal is to be able to create his own cottage industry, which in fact will include all the necessary workplaces and all the necessary machinery for the production and packaging of its products.

The team will visit again at the end of the agri-food acceleration program, the production and packaging areas of George, to evaluate the progress of work and to offer him additional support in whatever else he may need.

In his next plans, of course, is to be able to make his cottage industry visitable to the public, following the standards of "open farm" which he was taught through the agrifood accelerator "Agroanelixis". "If the consumer comes in contact with the product and knows the process of its production, he understands better what exactly is it that he is consuming, he appreciates it more", says George.

Also, his goal through the idea of "open farm", is to pass on the knowledge and techniques on the creation of its products to other people, who may be interested in dealing with the production and processing of almond products. The consumer or the visitor will be able to see, for example, how the almonds are baked or how they are packaged to maintain their freshness, but also how they are processed into butter. They will also be able to participate during summer months in the fruit harvest, thus offering them a complete experience of operating a cottage industry.

In addition to almonds, George also grows apricots, which he aims to integrate into his home-based industry, after completing the plan he has formed for the use of almonds. In fact, he already has in mind very interesting ideas that can combine these two crops, such as almond butter with pieces of dried apricot and much more.

The love that George has for his cottage industry and his dreams for it, are obvious. "My main goal for the future is one: to be able to make this business my main job, to be able to invest all the time and energy I have to develop this venture. And I believe that with the valuable contribution of New Agriculture New Generation, we will achieve that!", he states. After the successful completion of the goals set under the agrifood acceleration program "Agroanelixis", the next step for George is the development of his sales network, starting of course from Greece but slowly looking at specific foreign markets, where the products made from almonds are already considered emerging premium products. 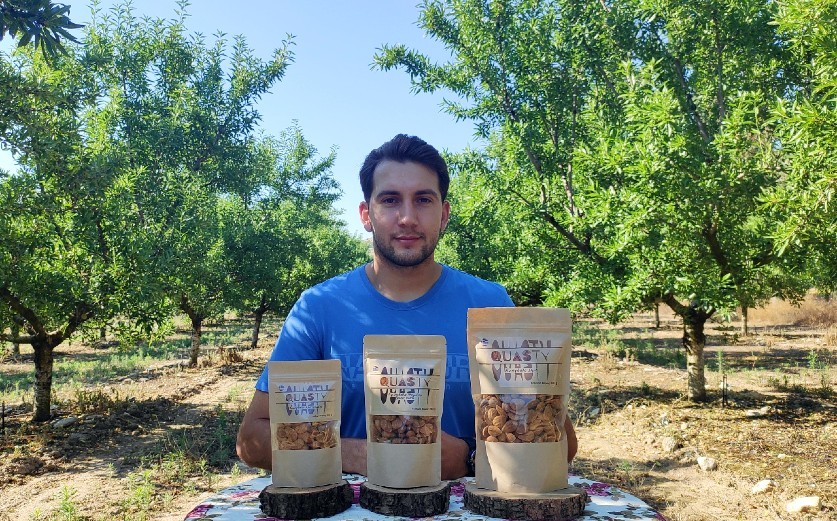